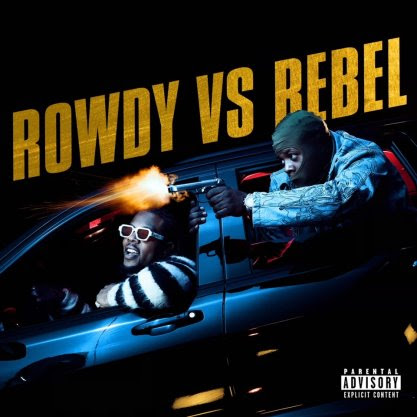 “Rowdy vs. Rebel” is as vulnerable a look into the life of Rowdy Rebel as the NYC star has offered since his release from prison in 2020. Aptly, Rowdy reminds the listener that despite the progress he’s made, understandably, there are fibers of his old life that still linger. “Late nights, I’m out of my mind,” he raps as the beat quiets. “I talk to myself, and this [is] what I find.” He resists negative thoughts for a few short bars, then lets them win as the unmistakable drill beat kicks back in.

The video, directed by Damien Sandoval (Latto, “Big Energy”; Tyga, “Taste”) mirrors the song’s frenetic energy. Split-screen effects and creative lighting illuminate Rowdy’s struggle, but the rapper’s energy never fades. Rebel, a pioneer of the initial Brooklyn drill movement (2010s), has not lost a step literally or figuratively. He is joined by fellow rapper Fetty Luciano on set as they both ensure that the twirls and bops that characterize Brooklyn’s present-day drill scene continue to reach the masses.

“Rowdy vs. Rebel” follows a slew of promising releases from Rebel leading up to the release of his “comeback” full-length project. 2021 saw Rowdy collaborate with Funk Flex, Nav and A Boogie on a trio of buzzworthy releases, as well as the Hot 100-charting collaboration with Young Thug, “Came and Saw,” from the YSL imprint compilation album. He’s also been back to work with longtime friend and collaborator Bobby Shmurda on “Shmoney,” which also features Quavo of The Migos.

Despite a relatively brief career to this point, Rowdy’s legacy is robust. Alongside Bobby Shmurda, of “Hot N***a” fame, Rowdy ushered in a new era of Brooklyn rap in 2014 with songs like his RIAA Gold-certified single “Computers” and cult classics like “Shmoney Dance.” The movement, co-signed and acknowledged by the likes of Beyoncé and Justin Bieber, helped set the stage for the borough’s current drill wave, popularized by the late Pop Smoke. Rebel’s voice is sampled on “Make It Rain” from Pop’s posthumous debut album.