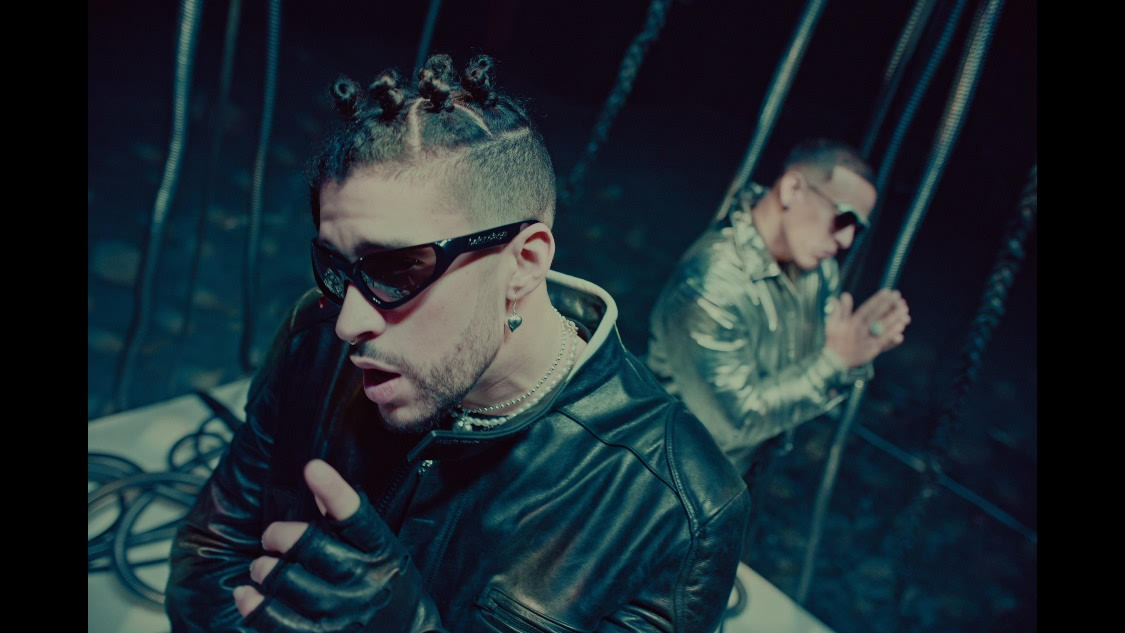 Daddy Yankee and Bad Bunny reveal the blockbuster music video for their new single “X ÚLTIMA VEZ,” which appears on Daddy Yankee’s LEGENDADDY, which is the #1 Latin Album in the World!

The cinematic visual unites these two titans on screen. It places them in an otherworldly realm. With a sci-fi undercurrent, dark figures encircle this dynamic duo as the clip cuts to a shot of the goat on the album cover—a clear symbol of Daddy Yankee’s legacy. It’s unlike any other video either superstar has done. “X ÚLTIMA VEZ” has notably emerged as a fan favorite, amassing over 44 million streams right out of the gate.

LEGENDADDY just bowed at #1 on the Billboard Top Latin Albums Chart, arriving as his fifth consecutive #1 debut on the respective chart. Additionally, it catapulted into the Top 10 of the Billboard Top 200 at #8, marking his highest position on the chart to date and first Top 10 in 15 years since 2007’s El Cartel: The Big Boss. Additionally, it soared to #1 on the Spotify Weekly Top Albums Chart and has amassed over 370 million worldwide streams.

LEGENDADDY incited widespread critical applause. Variety proclaimed, “Spanning over three decades of music, the 19-track collection captures the essence of reggaeton, salsa, dancehall, rap, trap, bachata, EDM, and Caribbean influencers,” and The New York Times noted, “The most dynamic moments come when Yankee reaches for the magic of the past – whether indulging in boastful hubris or summoning listeners into dance floor reverie.” Rolling Stone awarded the record “4-out-of-5 stars” and raved, “He’s going out in a blaze of glory.”

Right out of the gate, LEGENDADDY took over Spotify worldwide, ascending to #1 on the Global Album Chart, achieving the biggest streaming day of his career on Spotify with a staggering 35.7 million streams—almost double his prior career-best. The album reached #1 in 19 markets, including Argentina, Chile, Colombia, Ecuador, Peru, Mexico, Spain and more on Apple Music’s All-Genres list. Additionally, five of the album’s music videos have vaulted into the Top 10 on YouTube. He has bested his own personal records with the album – and it has only just begun to catch fire too!

However, his goodbye is hardly an occasion for tears. Instead, LEGENDADDY might just be the biggest part of the century as he invites a variety of A-list friends to celebrate over three decades of music on this 19-track opus. To herald the record’s arrival, he accompanied the release with nine exhilarating and high-energy music videos for “AGUA,” “LA OLA,” “ZONA DEL PERREO,” “HOT,” “BOMBÓN,” “EL ABUSADOR DEL ABUSADOR,” “IMPARES,” and for his single “REMIX.” The single’s head-nodding beat and reggaeton production underscore hard-hitting verses and a rafter-reaching refrain. It pops off as a banger on par with his most applauded output. The accompanying visual proves equally scorching, stylish, and sexy.

Watch all of the videos: HERE

From the epic Michael Buffer-led opener “LEGENDADDY” through the emotional finale “BLOKE,” LEGENDADDY traverses a myriad of styles and sounds made famous by Daddy Yankee throughout his iconic run thus far. Other highlights on the album include “CAMPEÓN,” which tackles his career and what it took for him to be a champion in the industry as well as his staple signature tropical fusion sound that he melds together so well with the Luny (Luny Tunes)-produced track “RUMBATÓN.”

Not to mention, he attracts his most superb guest list yet. Rauw Alejandro and Nile Rodgers rolls through for “AGUA,” while he and Bad Bunny turn up on “X ÚLTIMA VEZ.” There’s also the unshakable and unforgettable “ZONA DE PERREO” with Natti Natasha and Becky G and “HOT” with Mr. Worldwide himself, Pitbull. Lil Jon and El Alfa team up for the international banger “BOMBÓN” and on “PASATIEMPO,” he links up with Myke Towers for an explosive anthem, while “PARA SIEMPRE” sees him turn up with Sech. He also collaborated with some of the industry’s hottest producers including Play-N-Skillz, Luny (Luny Tunes), Tainy, OMB, JBD, Dímelo Flow, Slow Mike, Nekxum, BK, Jhon El Diver, Wiso, Alex Killer, G.O.K.B., Maki Váez, Scott Summers, Chris Jedi, Gaby Music, Muzik Junkies, DJ Morphius and Blu Rey.

LEGENDADDY stands out as his first album in ten years and his boldest, brightest, and biggest musical statement ever.

For one last time, he will canvas the world on his farewell tour “LA ÚLTIMA VUELTA” (The Last Round). It will kick off in Portland, Oregon at the Moda Center on August 10th. Promoted by Cardenas Marketing Network and Raphy Pina, MR Sold Out, the five-month trek includes some of the rapper-songwriters’ biggest headline shows in North America and Latin America to date. Tickets are on sale now HERE.

On his retirement, Daddy Yankee said, “Today, I’m announcing my retirement from music by giving you my best production and concert tour. I will say goodbye celebrating these 32 years of experience with this new collector’s item, my album LEGENDADDY. I’m going to give you all the styles that have defined me in one single album.”

That album is LEGENDADDY, and it is here forever.