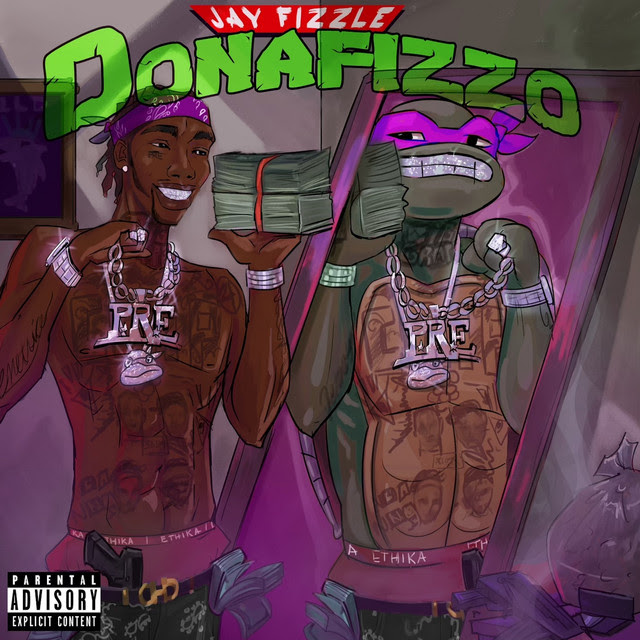 With a knack for invention embodied in every flow he creates, it’s not hard to see why Jay Fizzle identifies so closely with his favorite purple Ninja Turtle, Donatello. Enlisting Big Scarr and fellow Paper Route Empire artist Big Moochie Grape as his fellow Memphis Mutants, Fizzle shares the new video for “Dust Town Livin” from his recent mixtape, DonaFizzo. The track finds Fizzle laying the groundwork for the trio’s pursuit of the paper, casting Scarr and Moochie as his Leonardo and Rafael with each artist’s unique talents combining to heighten the strength of the team.

A 2 Brothers Film, the video for “Dust Town Livin” finds each featured artist in their element, but none more so than Fizzle. He keeps his hands full with stacks of green to his left and a cheesy pizza to his right as he soaks up the turtle power of the comic book pages plastered on every inch of the walls surrounding him. Next, XXL Freshman Big Scarr pulls up and the scene shifts to a parking lot barbecue as Scarr eats up his verse with an appetite that can’t be contained. Soon, Big Moochie Grape enters the fight as he steps out from a vintage Airstream camper, spitting money-hungry flex after flex, ready to bring the smoke on the road at a moment’s notice.

Released last month, DonaFizzo finds Jay fitting his flow into unexpected pockets on each stellar instrumental–including beats from heavy-hitters like Bandplay, Ayoza, and Sosa 808–with mutant-like machismo. With a style inspired by his own Master Splinter, Young Dolph, Fizzle’s desire to ascend from the gutter can be felt in every track. From the arcade villain-esque “Nike Check,” to the Mission: Impossible-esque bounce of “50 Freaky B*tches” ft. 21 Lil Harold, to the furiously flex-heavy “Nothing Into Something,” DonaFizzo hits harder than a bo-staff from start to finish.

Along with the mixtape, Fizzle shares new video for the Sosa 808-produced standout, “Atmosphere.” The Brothers Film-directed clip finds Fizzle bringing more smoke than a Memphis rib spot as the video opens on a trio of black-clad masked menaces tagging up a squad car before soaking it with gasoline. No matches required, the car erupts in flames at the drop of the beat as Fizzle stokes the inferno with explosive flows.

DonaFizzo is the latest salvo in a busy year for Jay Fizzle and the rest of PRE. Fizzle kicked off the year with purpose, sharing “LLD,” a heartfelt tribute to his mentor Young Dolph. Adorned with lush harmonies and a star vocal turn from Ricco Barrino, “Long Live Dolph” finds Jay Fizzle baring his soul, the South Memphis native audibly emotional when he relays his gratitude to his mentor for teaching him everything he knows: “The way I talk, the way I walk, the way I act, the way I dress/The way I do my thing up in the booth, I learned it from the best.” With over 1.8 million views on YouTube, “LLD” is the opening track from Paper Route Empire Presents: Long Live Dolph, a compilation album from the independent label, which features appearances from nearly every artist on PRE, including Key Glock, Big Moochie Grape, Kenny Muney and more.