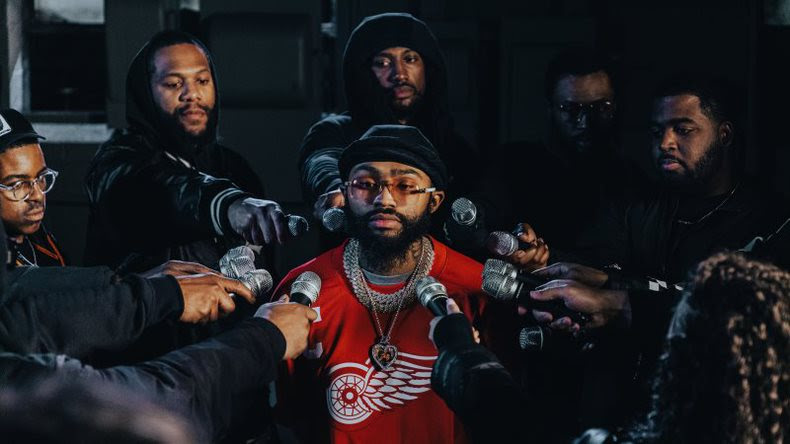 Courtney Bell, the lyrical Detroit rapper endorsed citywide, has returned with renewed sense of purpose, perspective, and vision on his latest single & video “Introspection”. After taking a brief hiatus from making music to focus on his mental health, community, & spiritual journey, Courtney lets listeners into the most intimate corners of his mind detailing the deep learning that occurred during his break and the extensive demons he fights on the daily. Over a subtle sample, jazzy drums, and waining keys, “Introspection” is a slow-burning confessional coupled with a lyrical exercise, showing the sheer ability & transparency that makes Courtney such a unique entity in today’s hip-hop landscape. The song encompasses the harrowing year Courtney Bell has had after tragically losing 13 people in his life to COVID, fiercely battling addiction, and even briefly losing his drive to make music. The visual for the track shows Courtney bouncing up-and-down the halls of a hospital draped in a medical gown, preaching about all of the heavy thoughts that occupy his brain and detailing the deep layers of his distinctive perspective. After taking time to find peace and figure out his own path, Courtney Bell is back and better than ever and ready to show the world he’s an MC like no other with “Introspection”.

Courtney Bell seeks to lessen the dissonance between trap and conscious rap. In 2020, he released his Poverty Strickenalbum featuring DCMBR, Janae Lynn, and TDE signee, Reason, who appeared on the Justice League-produced single, “Garments”. In the past, Courtney Bell has opened up for notable hip-hop acts such as Boogie, Eric Bellinger, and Dave East. Unafraid to use his platform to speak up, Courtney Bell often unapologetically expresses his frustrations against injustices committed against the Black community as heard in the Boogie assisted “Lion’s Den,” and open letter, “Dear Rap Negus.” He followed this up with a string of singles in 2021 including the Icewear Vezzo assisted “Deebo” & “Crime Pays” featuring bubbling rapper Allstar Jr. Now, after taking a brief hiatus to reevaluate his priorities, perspective, and position in the game, Courtney Bell is prepared to establish himself in the upper echelon of hip-hop today.

@KiddBStylin Slides Through On “Knew How To Love”